She is a Former Disney Animator, Creator of Classic Characters & Sculptor of Unique Stylized Stone Animals. A Conversation with Professional Artist, Ellen Woodbury

Ellen’s work is juried into national and international shows, shown in museums, and is held in private and public collections throughout North America.

Q: Before your current career of Stone Sculpting, you worked for Walt Disney for 20 years. Can you tell us about your position and the work you did?
EW: This is a long story. My Master’s Thesis film at California Institute of the Arts won a national student film award, which led to an interview at Disney, and I was hired into Disney Feature Animation in 1985. I worked at Walt Disney Feature Animation for 20 years, from 1985 to 2005, during the Second Golden Age of Disney Animation. I started as an Assistant and worked my way up to my dream job of Directing Animator.

I began at Disney Feature Animation as an Assistant Animator doing Clean-up, which is putting a clean line on the rough animation created by the Animators. This was on “The Great Mouse Detective.” I created a series of personal animation tests while still doing my job in Clean-up, applied my tests to the Artistic Review Board, and was promoted to Apprentice Animator on the next film, “Oliver and Company.” I worked and learned from several extraordinary animators and was promoted to Journeyman Animator on “The Little Mermaid”, animating in the Sebastian unit. I worked as an Animator on “The Rescuers Down Under” animating Krebbs, the koala, myself as the lead animator on that character, and also mice. I animated in the Maurice unit on “Beauty and the Beast” and also lead the animation on the Enchanted Footstool character. I animated in the Abu unit on “Aladdin” and was promoted to Directing Animator on “The Lion King”.

Zazu was my first character as a Directing Animator. With this promotion I became the first female Directing Animator in the history of Walt Disney Feature Animation. My job was to help design the character, flesh out and refine his personality, figure out everything about how he acts and moves, animate a large portion of the character myself, and supervise my crew of animators in my Zazu unit to make sure the performance and drawing of the character were consistent and as entertaining as possible. It was very important to realize the vision of the Directors of the film, and I worked closely with them to bring Zazu to life. This was my dream realized—having the creative input and responsibility of bringing a Disney animated character to life.

I was a Directing Animator for the next 10 years at Disney. My character on “Hercules” was Pegasus the flying horse, and I animated Silver’s crew of alien pirates on “Treasure Planet”. Creative responsibilities were the same as with Zazu, and I embraced the fun and extremely long hours of bringing these characters to life.

I was instrumental in creating a computer animation training program at Disney Feature to retrain many of us traditional animators to animate on a computer. This was in 2000. I animated on two more films as a computer animator before quitting Disney. Computer animation was and is very exciting in very many ways. However, once we got 5 years into computer animation it was a frustrating experience for me because the process was much slower. Disney hand-drawn Character Animation is a sort of total body experience drawing and flipping the drawings to create the acting and movement. After planning the scene with thumbnail drawings, the first rough pass on a scene is a thrilling flurry of drawing and reflecting on the drawing, and feeling the movement. Picking and clicking on a computer and moving a rig around was tedious and lacked the feeling of the moment and the feeling of the movement.

Q: When did you realize it was time to move on from Disney and focus on your Stone Sculpting work?
EW: Life comes to a crossroads at times. As we were creating our first couple of computer-animated films at Disney I had a series of losses. I lost my Dad to Alzheimer’s Disease; my art form which was traditional hand-drawn animation; my mentor at Cal Arts, avant garde animator and abstractionist Jules Engel; my hero, Frank Thomas, one of the Nine Old Men of Disney Animation; my cat of 16 years; and my horse went permanently lame. I still had my position as a computer animator at Disney, but it was unfulfilling compared with the extreme fun and leadership of creating traditional hand-drawn characters and animation. It was no longer the dream job. 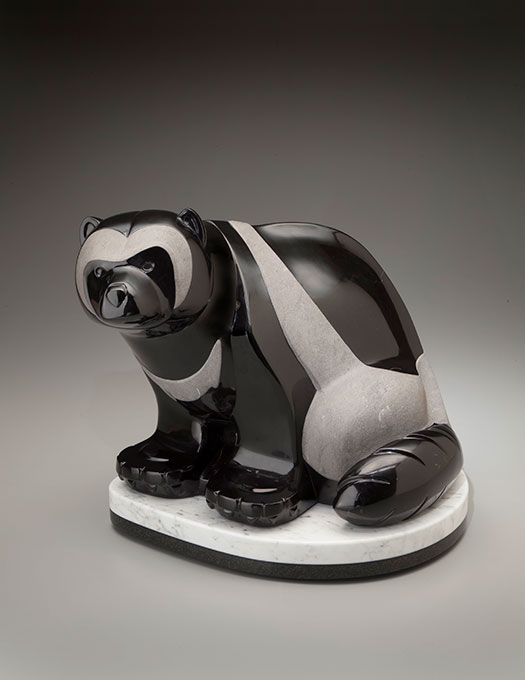 Q: When you left Disney, what led to your decision to move to Colorado?
EW: As a computer animator I sorely missed working with my hands. One of the weekly drawing instructors at Disney gave us clay to make into something he would have cast in brass at an industrial foundry. I made a guitarist in the pose my husband, a professional acoustic guitarist, always takes when he plays the guitar. I loved making the sculpture and made more. It was such a reward to make something I could hold in my hands. I visited Loveland, CO, home of Sculpture in the Park, the largest outdoor sculpture show in the US. I was overwhelmed, went back to LA and continued to make little sculptures, this time casting to bronze at a fine art foundry. A year later my husband and I sold our home in CA and moved to sculpture town—Loveland has 4 foundries, and 800 artisans who work in the bronze industry. I thought I would work in bronze when I moved to Loveland, but I took a course in stone sculpting at the Loveland Museum and fell in love with the medium of stone.

Q: What are some of your popular creations?
EW: My 2019 sculpture of an Arctic Fox titled “Arctic Wind” won a national award from the Society of Animal Artists; an international juried art organization that holds large museum shows each year. This prestigious award was given to “Arctic Wind” for the most exceptional and creative artwork in 3-D.

Q: On average, how much time does it take for each Stone Sculpting creation?
EW: The time it takes to make a stone sculpture varies depending on the size of the piece, the degree of complexity of the design, and the degree of difficulty of the stone. Every sculpture takes me at least 200 hours to make. I do not keep track of design time because that is just too intrusive. Some designs take a year or more to come together. Some very complex designs carved from very tricky stones take up to 700 hours or more to make. Carving and finishing time vary with each piece. My work is one-of-a-kind and I carve each design only once.

Q: What’s one lesson you’ve learned in your career that you can share with our audience?
EW: Planning is the key to success in animating a great scene, and paramount as well in the subtractive medium of stone sculpture. Once you cut it off, it’s gone!

Q: Can you tell our audience one of your most memorable moments in your career?
EW: I received the Marilyn Newmark Memorial Grant for excellence in animal sculpture from the National Sculpture Society in June 2019. I submitted 12 sculptures to this national competition, and the award was given for the excellence of my body of work. This was a life-changing experience because I was recognized for my art, for the sculpture I create speaking with my own voice. The grant was $5,000, which I used to create a large bronze cat, “Top Cat”, homage to the importance of animals in our lives. I added money of my own to realize the sculpture, which was just finished a couple of weeks ago. It will premier at my up-coming show at the Loveland Museum main gallery space this fall. The show is called “Flora and Fauna” and runs from November 10, 2020 to January 10, 2021. It is a two-person show with sculptor Kathryn Vinson, who creates sculptures of plants and insects.

Q: What is most important to you and why at this point in your life?
EW: Speaking with my own voice is essential to my creative expression. I am an advocate for animals and the environment, and many of my sculptures are of endangered species. When one of these endangered sculptures sells I donate part of my share of the purchase price to a non-profit organization that helps that animal or that ecosystem to survive. We are the dominant species and must be stewards of the earth. 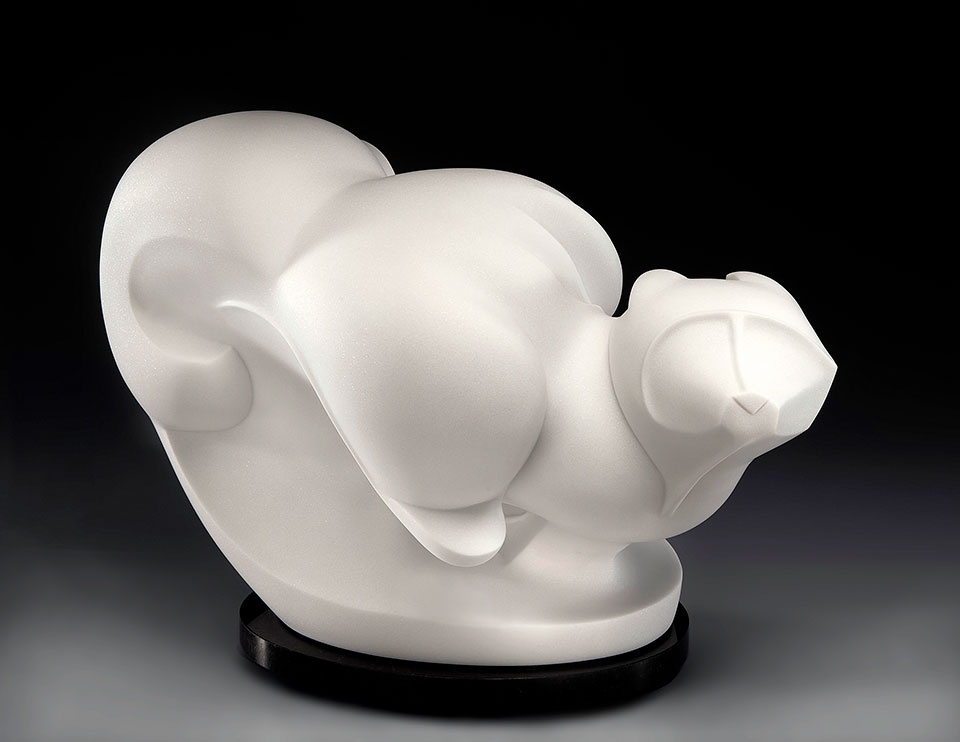 1. Favorite dessert?
I have a ton of food allergies: some of the worst are egg whites, malted barley flour (an additive in nearly all white flour), and chocolate (sigh). Consequently I make my own desserts. One of my best recipes is carrot cake with dried cranberries. I use organic white flour, which does not contain malted barley. It took a long time to perfect the recipe, but it is fantastic!

2. Favorite Cartoon Character?
I have very many favorite cartoon characters. One of my favorites is Remy, the tiny chef rat in Pixar’s “Ratatouille”. Remy’s heart’s wish to be a fine chef is very similar to my heart’s wish to be a fine stone sculptor. One of the messages in this film is that not everyone can be great, but greatness can come from anywhere. I find this philosophy very encouraging.

3. What’s the best advice anyone’s given you?
One of my colleagues at Disney told me when you have a problem with a scene and need to bring it to the attention of the Directors always have two viable solutions to the problem. The Directors may not use your solution, but it gets their brains working in that direction such that they are able to come up with a solution quicker and easier. Directors have the entire film on their minds and helpful ideas are always appreciated. I find this approach works great in any situation where you do not have the authority to make the decision yourself.

The best advice I give to others is to always be excellent. It is your time and your life. Do not waste it being mediocre.

4. What’s your favorite city and why?
New York, New York is my favorite city in the world. Granted I have not travelled extensively, but I do love New York. Both my sisters lived there for large portions of their lives and know the City very well. We meet there every year or so and go to amazing restaurants, inspiring museum shows, and have the best time. They are both world travellers and I reap the benefits of their knowledge and experience. Plus they are both really fun and interesting people

Q: You acknowledge that you’re a trailblazer. For women entering the sports agent field,..

She’s Dedicated to Understanding What Re..